Our lives have been completely revolutionised by location based services. Ubiquitous GPS in smartphones and receivers has launched more than a thousand applications that touch our lives in more ways than one. Taxis, e-commerce, restaurant delivery, transportation have been deeply impacted by easily available and reliable GPS systems. We have used GPS devices to power a number of applications that have helped businesses and individuals. Over the years we have helped police recover stolen vehicles, insurances validate accidents and process insurance claims faster. The warnings from our systems triggered quick actions in times of crashes and have saved lives. Location and GPS technology is at the core of most of our solutions. You may have wondered how do GPS’s work. In this blog we will discuss how GPS works in very simple terms.

Location over the years

You have to know where you are, before you know where to go. All travellers, whether on road water or air need a way to know where they are. Since the dawn of civilization, humans have looked up to the skies for direction. They used the knowledge of astronomy and relative positions of the stars to determine where they were and the direction they had to follow. We do something similar today. We don’t depend on stars but we depend on man made satellites to figure out location.

The Global Positioning System or GPS was the first satellite system and it was launched by the USA in the 1970s. It is a system of 31 satellites orbiting the earth. These satellites were originally meant for the armed forces but in the 1980s civilian usage was also permitted. Eventually more countries launched their satellites to enable communications. Russia has the Global Navigation Satellite System (GLONASS), India has the Navik, China has the Beidou and the EU has Galileo. A lot of countries have chosen to launch their own location and navigation based satellite system recognising their strategic importance. 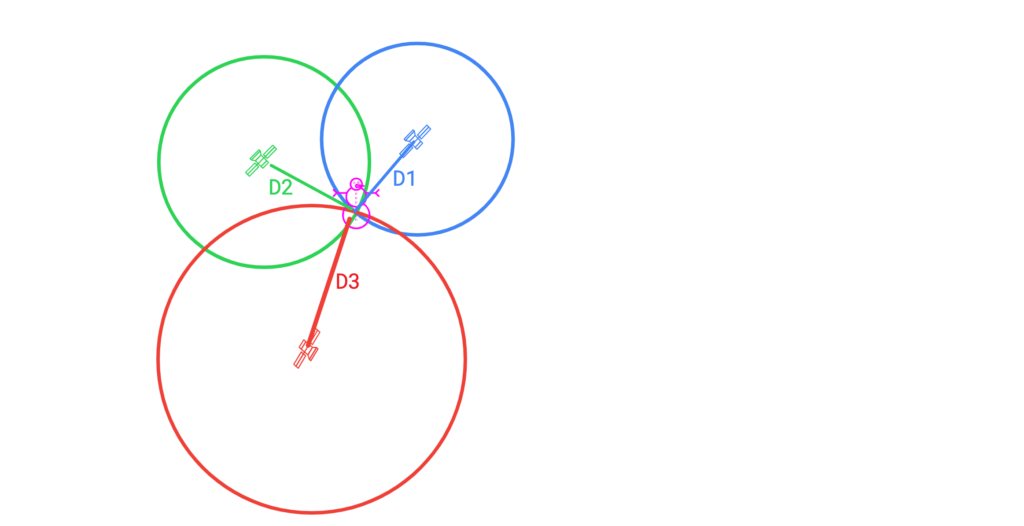 All the navigation satellites have accurate atomic clocks and they transmit signals which include the time and position. These signals are then picked up by receivers. All smart phones and GPS devices have a GPS receiver in them. These receivers calculate the distance from the satellite by comparing the time at which it received the signal and time the signal was transmitted by the satellite. If the satellite is further away it would take more time to reach earth. The GPS receiver then combines the data from multiple satellite sources to calculate or lock its location. This process is called trilateration. An example of this is shown in the picture above. The example in the picture shows how with 3 satellites you can detect a point on a two dimensional picture. The receiver needs at least 4 satellites to calculate latitude, longitude, altitude and time. The signals from satellites can be affected by clouds, solar flares, buildings etc. You may have noticed that you cannot catch GPS when you are indoors or in a basement. On the other hand, GPS locks their location in the open more quickly and accurately than indoors. If the receiver can detect the signals from more satellites, the location is more accurate. Modern receivers combine data from multiple satellite systems for e.g. GPS and Galileo to get a more accurate and faster lock.

We have used GPS and have built several solutions that can help tracking your assets and loved ones. Get in touch with us if you are looking for solutions.

Creating your own License Plate Recognition System in Python

How to choose the Right GPS Telematics Systems

How to setup secure EMQX MQTT broker on AWS Ubuntu 18

How to Launch a Spot Fleet on AWS